Backfrom the technical part to the fun factor: a conference without a party is not a conference. This applies not only to JAX, W-JAX, or MTC, but also to BlackBerry conferences. For me the first party-time was already happening the evening before the conference with a small party for BlackBerry Developer Champions – a perfect warm-up for the conference. Always good to meet developer – friends already known from previous years or only online from Twitter, Forums, …

At the end of the first conference day, the BlackBerry Party happens for attendees of BlackBerry World and BB10Jam conferences: RIM had booked the Universal Park in Orlando that night so you could enjoy the
attractions or relax at many places with a variation of food. At the Market Plaza was a great music show, where you could dance to the music presented by “The Martinez Brothers” – DJ’s.

The next evening the BB10Jam Party happens: something smaller, but also good food, music and plenty of opportunities to network with other developers and RIM employees.

image ‘we deliver’: from dreamstime.com (click to see the source)

Best presentations and advertising doesn’t help developers and that was the good thing in Orlando: RIM delivered the first BB10 SDK with Cascades to Developers. But the best: every developer gets the BlackBerry 10 DevAlpha Device, where all the new BB10 API’s can be tested directly on a device. Everyone developing mobile applications knows, that it’s important not only to test in a Simulator but on real hardware. It’s the first time that RIM is taking this path and gives a preliminary model out to the developers.

The Dev Alpha has an HD resolution of 1280×720, 3MP front-camera, 8MP rear-camera with flash and auto focus. Also on board: NFC and a lot of sensors. So it’s not a limited device – it’s full-featured.

You should be aware that this device does not correspond to the first BB10 smartphone, which will be presented at product – launch ! The DevAlpha is a pure developers device.

Alec Saunders promises: every developer developing a BB10 App before launch and uploading to the AppWorld can change the DevAlpha into a real BB10 Device for FREE.

Update: Beta 2 was delivered with many new API’s and enhancements, better tooling and also next Beta OS for the AlphaDevice. 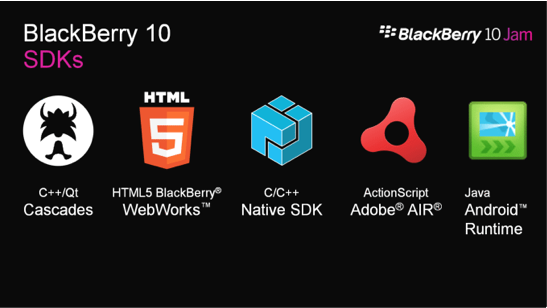 Wehave seen that there are different kinds of SDK’s. RIM’s focus is on the 1st-Class Citizens:

Based on the NDK, there are a number of other SDKs and frameworks. By using open standards and open source in a very short time many projects and frameworks are ported to BB10:

For more information about the https://developer.blackberry.com/devzone/platforms/bb10.

Enough written on software and SDK’s – at BlackBerry World and many events last weeks RIM also demonstrated some of the cool new features of BB10. I only want to take a look at the Keyboard and Camera.

A really highlight is the new virtual keyboard. The first BB10 smartphone will be a touch-only device, which is comparable with iPhone or Google Galaxy Nexus. RIM will also bring out BB10 smartphones with a physical keyboard, there are a lot of BlackBerry users, who still insist on it. Now – because of the delay – it makes sense that both smartphones (Touch and Keyboard) will be there together at BB10 platform launch.

RIM developed a new virtual keyboard for BB10, which in this form isn’t yet available on the market: word suggestions are displayed directly into the keyboard and you can use a “swipe up” to be shot it up into the text without moving your hand.

The deletion of text is also simple: just swipe on the keyboard from right to left and the last word disappears. In addition, the keyboard should also adapt to the typing habits of users – how this will work I don’t know.

This virtual keyboard will speed up the writing of text on a touch screen. A good hands-on video here.

BB10 Innovation: Get the Magic Moment

Everybody knows it: a great photo, but one person warped his mouth.

No problem for the BB10 Camera APP: Select the face and then like a time machine go back and forth to open or close eyelids and bring back the smile: get the magic moment.